Congee is an understated staple of many Asian communities. Who could have predicted that the humble rice porridge would become the centerpiece of America’s latest conversation about cultural appropriation?

Congee is a versatile rice porridge that is many things to many people. It’s served as breakfast, snack, or a meal. And while it only recently made news, the dish dates back to the Chinese Zhou Dynasty (1,046-256 BC).

The name “congee” is thought to be rooted in the Indian and Sri Lankan Tamil word "kanji," meaning "boilings." True to its name, grains (usually rice) are boiled in liquid until broken down to a luscious, creamy consistency. Since the base of most congee recipes require only a small amount of grains and a large amount of liquid, it has been a thrifty yet filling means of feeding large families with minimal ingredients and serving as a stopgap against hunger in times of famine. Different ingredients and toppings -broths, herbs, spices, seasonings, vegetables, and sauces- are as diverse as the cultures they reflect, and can be added for both flavor and medicinal benefits.

We asked four Asian-Americans how they eat congee and what memories this dish brings up for them. 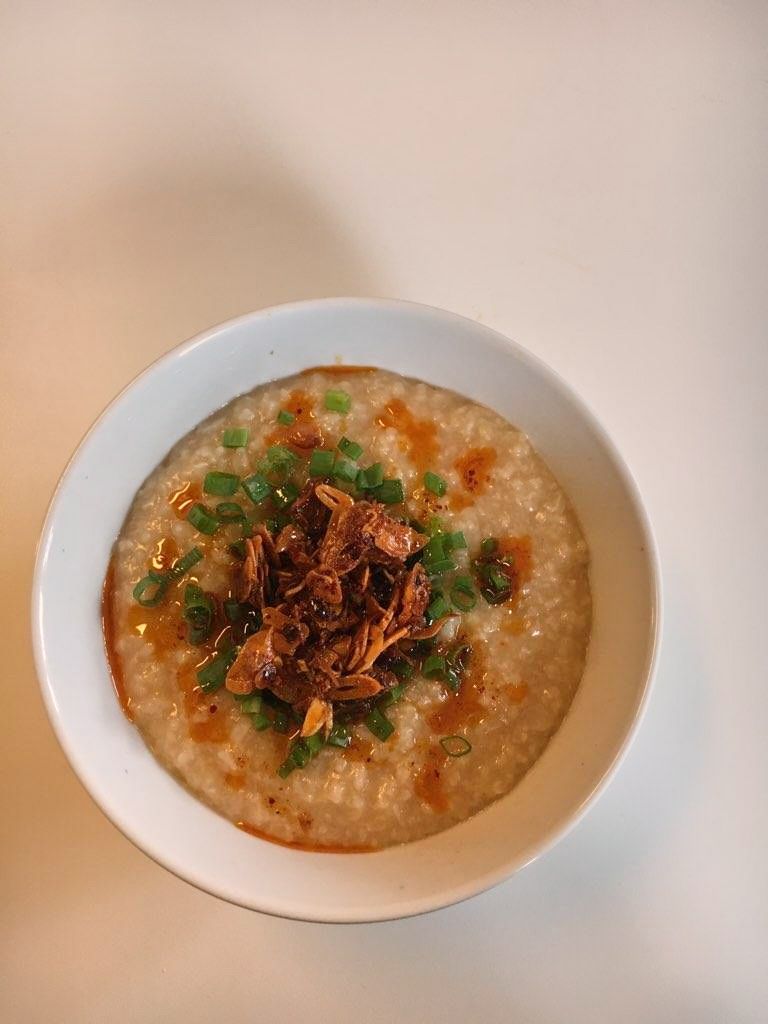 Riley Yangmi Jessen is half-white and half-Asian, and describes her Asian family as “mostly hill tribe.” Her mother’s family is in Thailand, so most of her cooking background is Thai. She prefers to call what she grew up with as rice porridge since most Asian cultures have their own name for congee.

One of the things she loves about rice porridge is that it can be so good with just a few simple ingredients. “It only takes 4 ingredients to get you there and anything you have on top of that is the cherries on top,” she explained. She usually starts with ginger, soy sauce, garlic, and white pepper. If she wants to make it more complex, she adds deep-fried shallots or onions for texture and “way too many sliced green onions.”

“Growing up, this is what my mom would make me when I was sick. She didn’t make chicken noodle soup. In adulthood now, when I’m sick, this is what I crave.” She also taught her husband, Josh, who is white American, how to cook congee too.

“I had never made congee before for Josh, but I was really sick and craving my [mom’s cooking], and for her to be there for me. So I asked Josh if he’d be willing to make me some rice porridge. I do most of the cooking, but it was very much a bonding experience to walk him through step by step how to create this but also for me to share such an intimate part of myself, my culture, and my upbringing. . . Congee is not a flashy dish, it’s not a festivity. It’s only a dish that’s prepared for you intimately by people that love you.”

Vicky Lee (Songeun Lee) a third-year transfer student at the University of Cincinnati studying fine arts and teaching. She is a first-generation Korean-American and grew up in Dayton, Ohio. When Vicky thinks of juk, Korean rice porridge, she thinks of her mom. Vicky’s mom made two different types of juk at home, chicken juk and patjuk, a red bean porridge. For the chicken juk, she boiled a whole chicken and either cooked the rice inside the chicken or alongside it. The family would scoop out the rice and eat it with the chicken with salt, pepper, lots of green onion, and a side of kimchi. For the patjuk, her mom steamed or boiled the red bean until it was soft, smashed it, and added rice cake and sugar. Adding the red bean to the rice porridge turned it purple.

She doesn’t make it much herself because she has such strong associations to her mom making it when she’s sick. “ Maybe I’ll want to make it later in life but I like that it reminds me of my mom. It’s a very family thing. . . All my family members would get together to eat it. Even though it’s very simple, it’s something very warm, and good for the winter and good for when you’re sick. It’s very welcoming and very comforting.”

Ron Reblando is a Filipino American and a father of six. He grew up with Filipino arroz caldo, which translates to “rice soup.” He loves arroz caldo’s chicken and ginger flavors, which bring back wonderful memories of family life in the Philippines. “When I can,” Ron says, “I try to make it from leftovers. It reminds me of simplicity and humility.” Nowadays he enjoys topping his arroz caldo with fresh green onions from his family’s container garden. 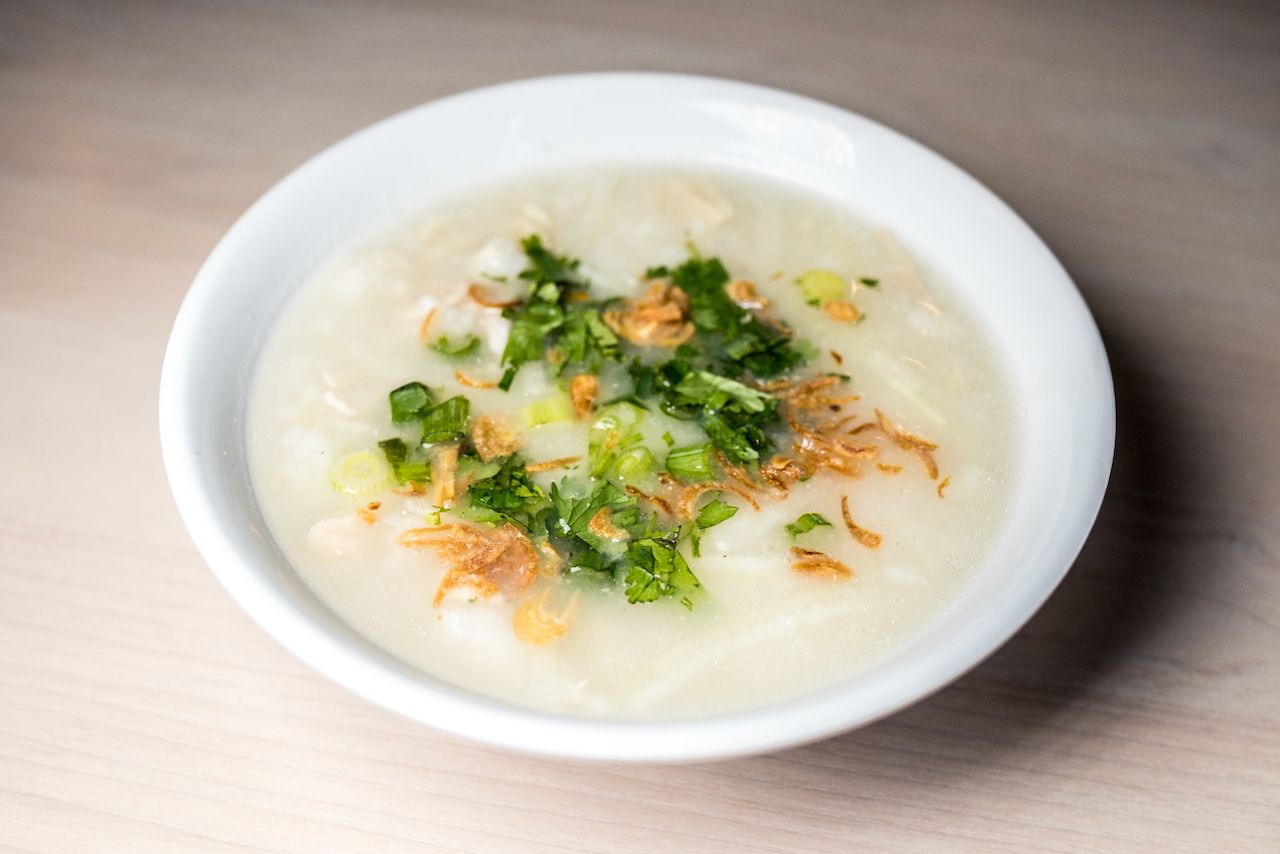 Duy-Nhan Nguyen is a first-generation Vietnamese-American and grew up in California before moving to Cincinnati for high school. He is a managing partner of Lang Thang Group, a restaurant group that owns Pho Lang Thang, Quan Hapa, and Hi-Mark. Duy grew up with two different types of rice porridge, cháo and a porridge served as part of Bò bảy món (beef seven ways). The porridge is served with beef or sometimes ox cuts, as the last course of the celebratory seven-course meal.

Duy explained that Vietnamese cháo is different than other congee because it’s cooked in broth rather than water. Cháo is comfort food that you typically eat for breakfast or when you’re sick. Unlike phở, which has certain rules to eating it, Duy says, “Congee is relaxed. Everyone has their own recipe.”

You don’t often see congee or rice porridge on Asian restaurant menus in America because it’s simple comfort food. However, locals can order congee from Pho Lang Thang. When asked why they decided to add it to the menu, he said it was to utilize the porridge as it’s intended — to utilize the scraps and leftovers from the restaurant. “Porridge is poor people food. You take your scraps, your leftovers to make it. That’s why there aren’t certain rules like phở. . . when [Vietnamese people] threw away all the rice and the cuts that we couldn’t use for pho, that’s what we make it out of.”

Rice porridge has always been an adaptable dish. However you eat it or wherever you get it from, congee has stayed a staple because it’s affordable and meant to feed people at a time when they need it most...no fancy packaging or flavors needed.

A couple places to find congee in Cincinnati: