American Thanksgiving is a holiday that symbolizes many things, such as harvest, togetherness, and like the name says— giving thanks. For this year’s Thanksgiving, I was asked to take a look at some ways Thanksgiving is celebrated in our Asianati and AACAC* households! 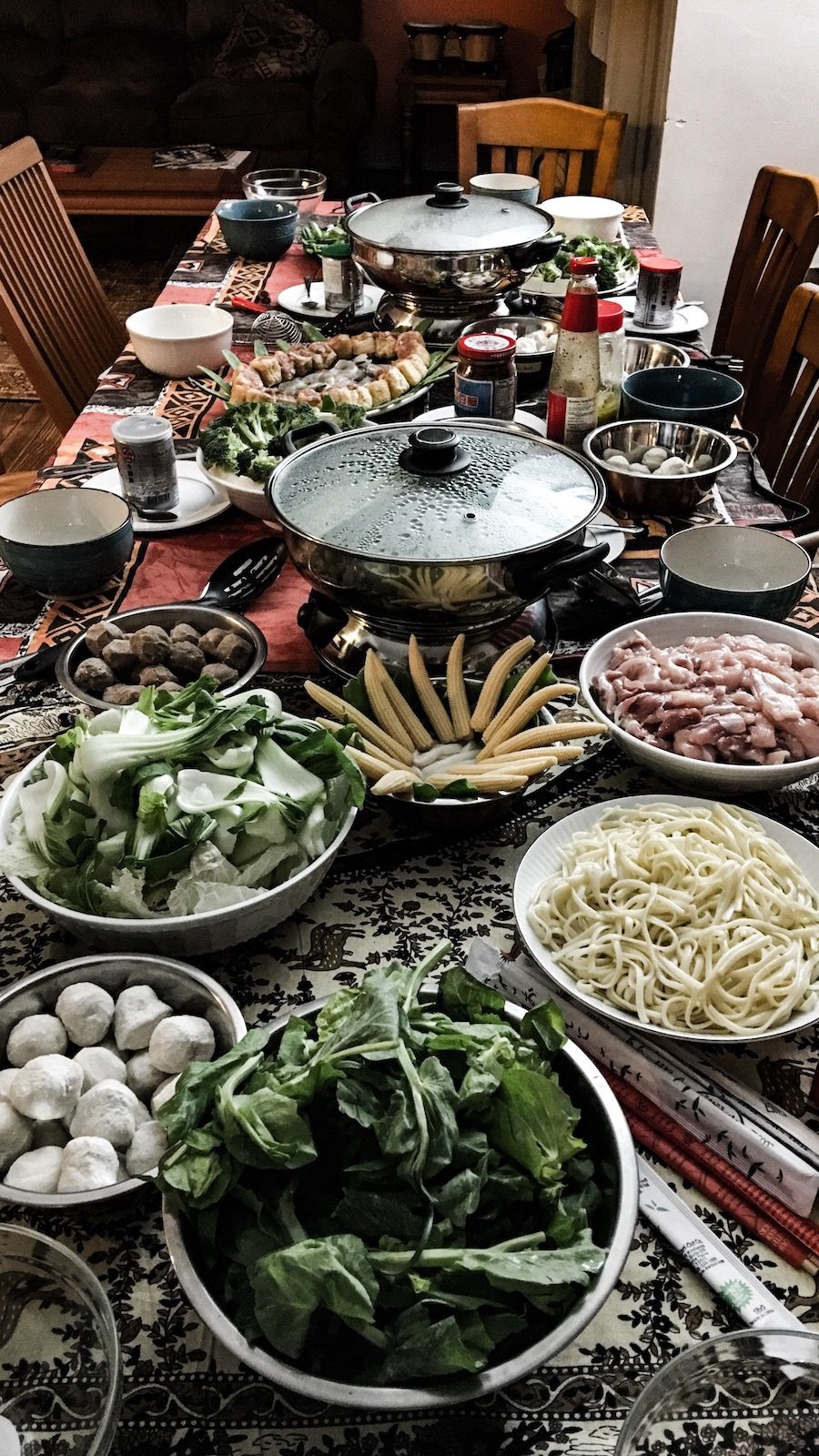 There tends to be two different camps of preference when it comes to Asian Thanksgiving dinners— those that are blended with American classics, and those that tend to stay independent and rooted in their own native comfort foods. For instance, AACAC board member Ronnie Iquina mentioned that his family “doesn’t really like turkey”, and so his mom makes cornish hens, which are a type of roasted chicken, instead. The cornish hens are then complemented with various Filipino dishes, such as pancit (stir-fried noodles), bistek (steak), and tinola (bok choy chicken/fish soup). AACAC President “Small” Bao Nguyen says his family has also stuck to favoring traditional ethnic food, mostly eating hot pot, and tend to cut out turkey from their holiday menu entirely. 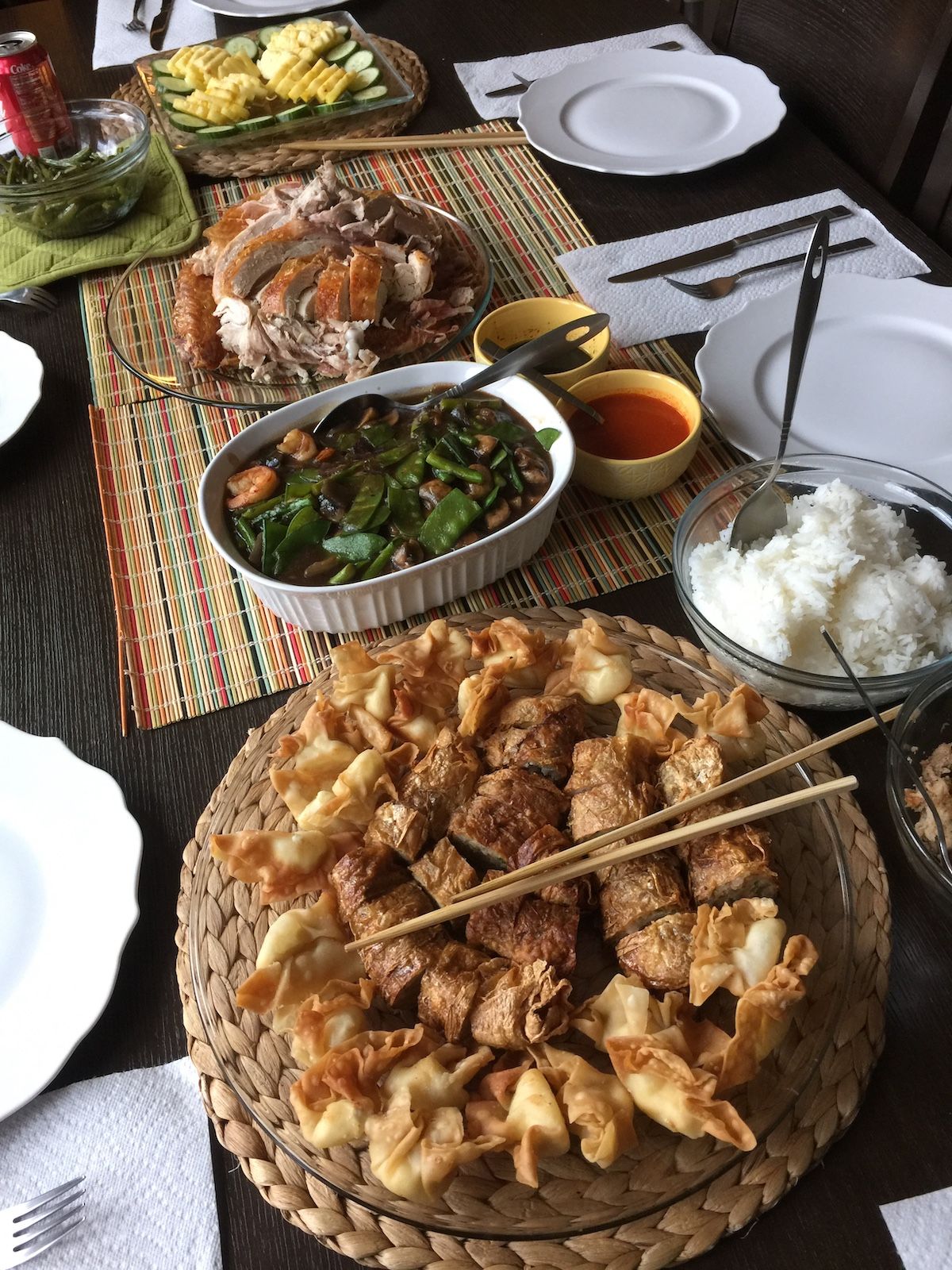 "...a bit much." Thanksgiving dinner, Leong-family style circa 2016. Photo provided.

While generic turkey and mashed potatoes may not be popular in every Asian household, some Asianati/AACAC families go for a balanced blend of both conventional and ethnic food for their feasts. Asianati Contributing Editor JP Leong’s family tends to celebrate with traditional Chinese special occasion meals like hot pot and roast duck but also supplementing with American staples like turkey and pumpkin pie which, he says, “...in retrospect… is a bit much.” AACAC board member Lam Dang says that for Thanksgiving, his family combined what they saw on TV as traditional Thanksgiving food, such as turkey and mashed potatoes, with their own wide blend of Vietnamese food. Some of the dishes his family frequently made included tiết canh (pork/duck meat pudding), banh beo (steamed rice cakes), súp măng cua (crab and asparagus soup), and ca ri (Vietnamese chicken curry). Likewise, Asianati co-founder Koji Sado’s family also likes to combine traditional Thanksgiving dishes with cultural dishes. My family’s also the same. However, both of our families put an interesting spin on how we combine the two cuisines— we make classic dishes, such as turkey and potatoes, but with a Desi style. What would be a typical turkey with gravy becomes a turkey covered with masala, and what would normally be mashed potatoes becomes aloo chole (potatoes and chickpea curry) instead. These two variations of classic American dishes are then surrounded by a variety of dishes. These include chicken biryani (spicy rice with chicken), palak paneer (spinach and cheese curry), and bhindi (okra).

So, what does your family do for Thanksgiving? Let us know by connecting with us on Instagram and commenting on our latest post! We hope that all of you and your families have a safe and wonderful Thanksgiving!